How to replace the `rootViewController` of the `UIWindow` in iOS

This is an advanced topic. It requires extensive background knowledge and experience. Unless you feel confident with what’s being discussed here, consider and be mindful of intricacies and unknown unknowns when implementing presentation transitions, state preservation and restoration on iOS.

Have you ever needed to build an app that:

In the above example, once the user has gone through registration, you want to discard every view controller involved in the sequence as well as replacing the rootViewController with a new UIViewController that comes after registration. 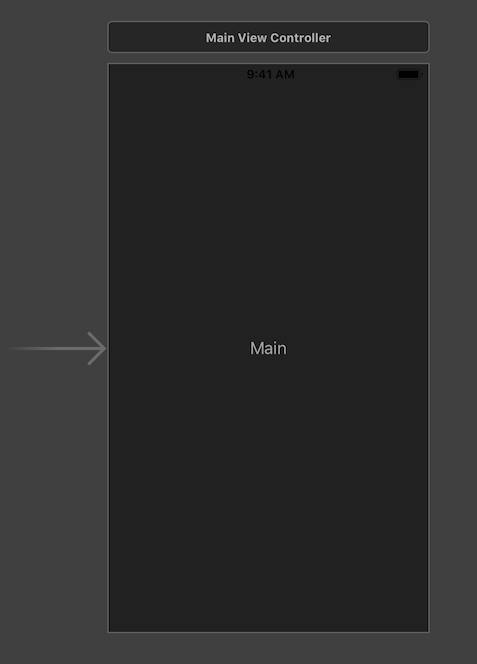 Notice how there is no use case where the user can navigate back to registration. There is no “Back” or “Dismiss” button in the MainViewController that can act as the root. For that reason, you should consider it best practise to discard any UIViewControllers and their respective views so as to bring overall memory usage down and establish a new baseline when a user has registered.

Let’s start with firing a Notification when the user selects “Done”.

Let’s see how that looks.

Notice how there is no transition between the DoneViewController and the MainViewController. This plays a far more important role that it currently seems as you’ll see later. Let’s peak behind the scenes on the view hierarchy. 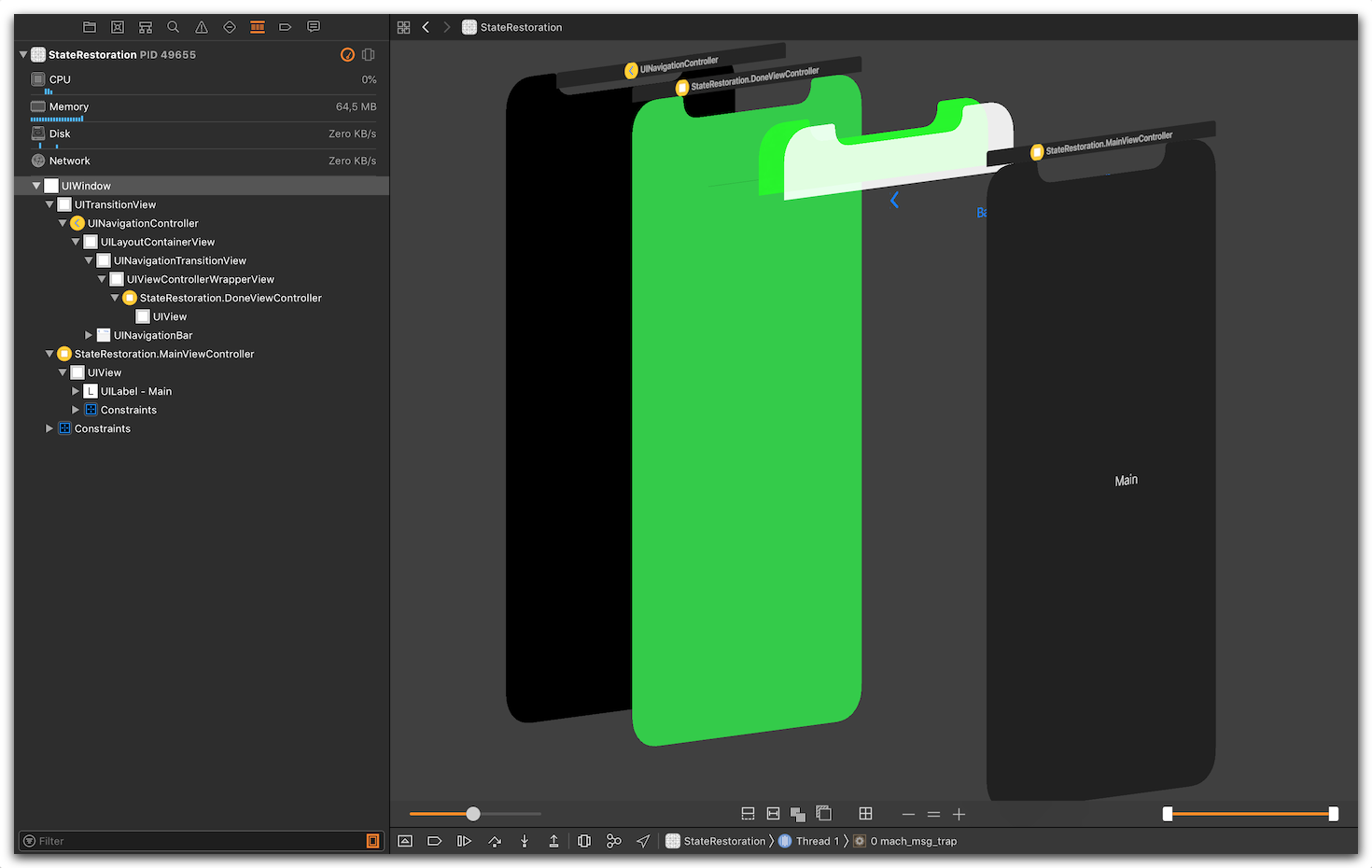 Even though the code replaces the rootViewController for the window, notice how the DoneViewController is still in the view hierarchy under a UITransitionView seemingly owned by the UIWindow. Here is a close look at the memory graph. 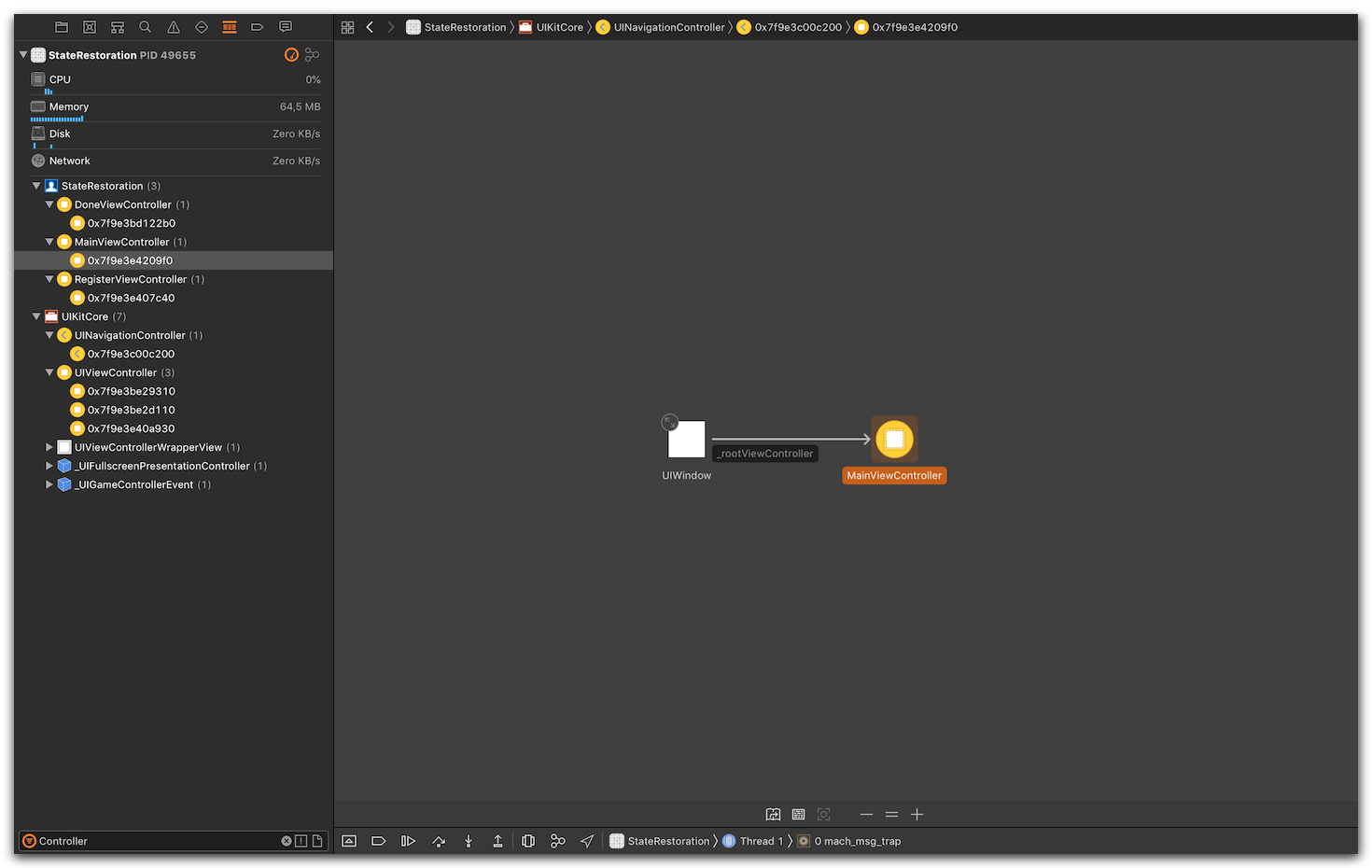 It looks like the RegisterViewController and all of its children are still very much present. Let’s try something else now. Before replacing the rootViewController, use a presentation transition to present the view controller we are interested in. 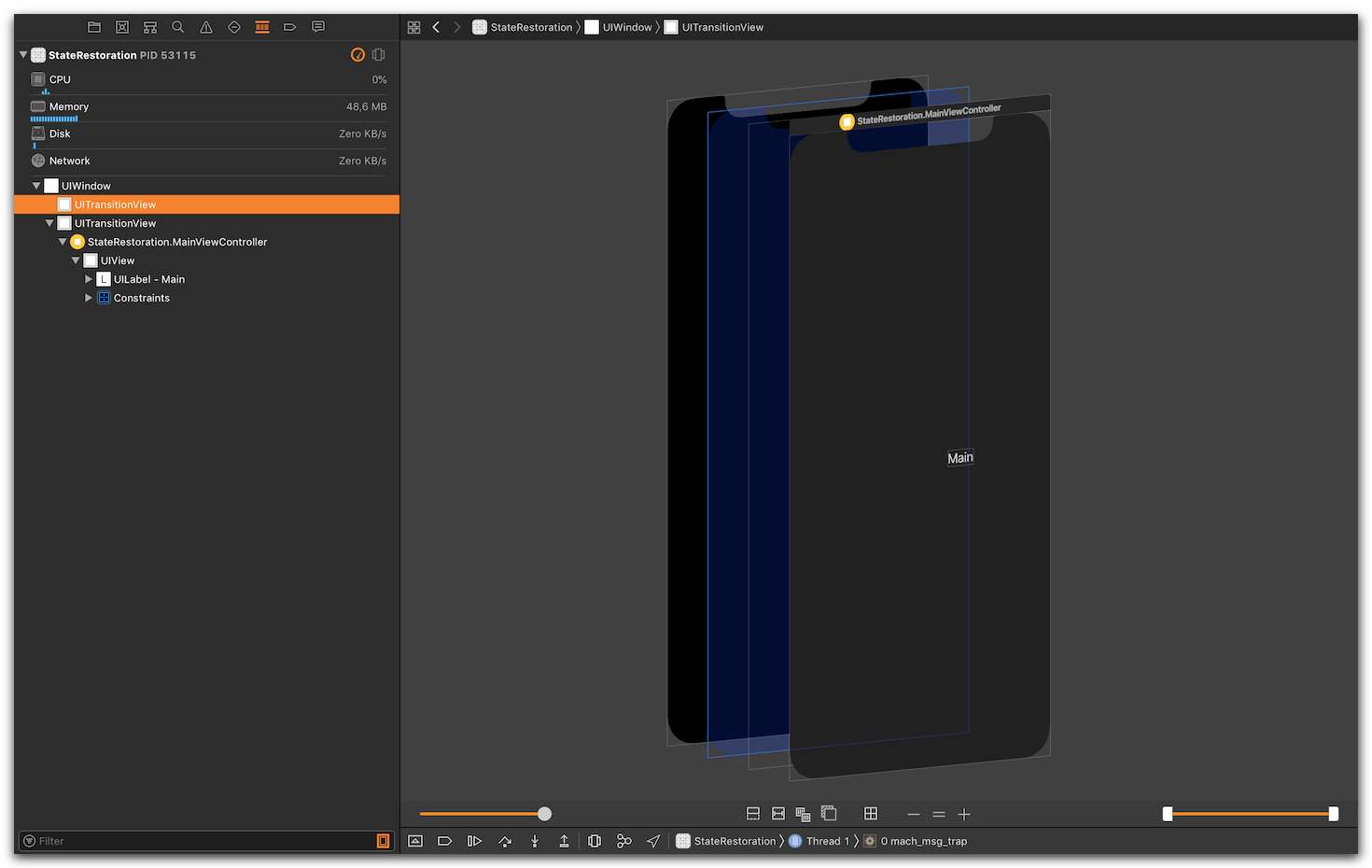 The view hierarchy indeed shows only the MainViewController present. Still, the UITransitionView should give you a clue as to what to expect in the memory graph. 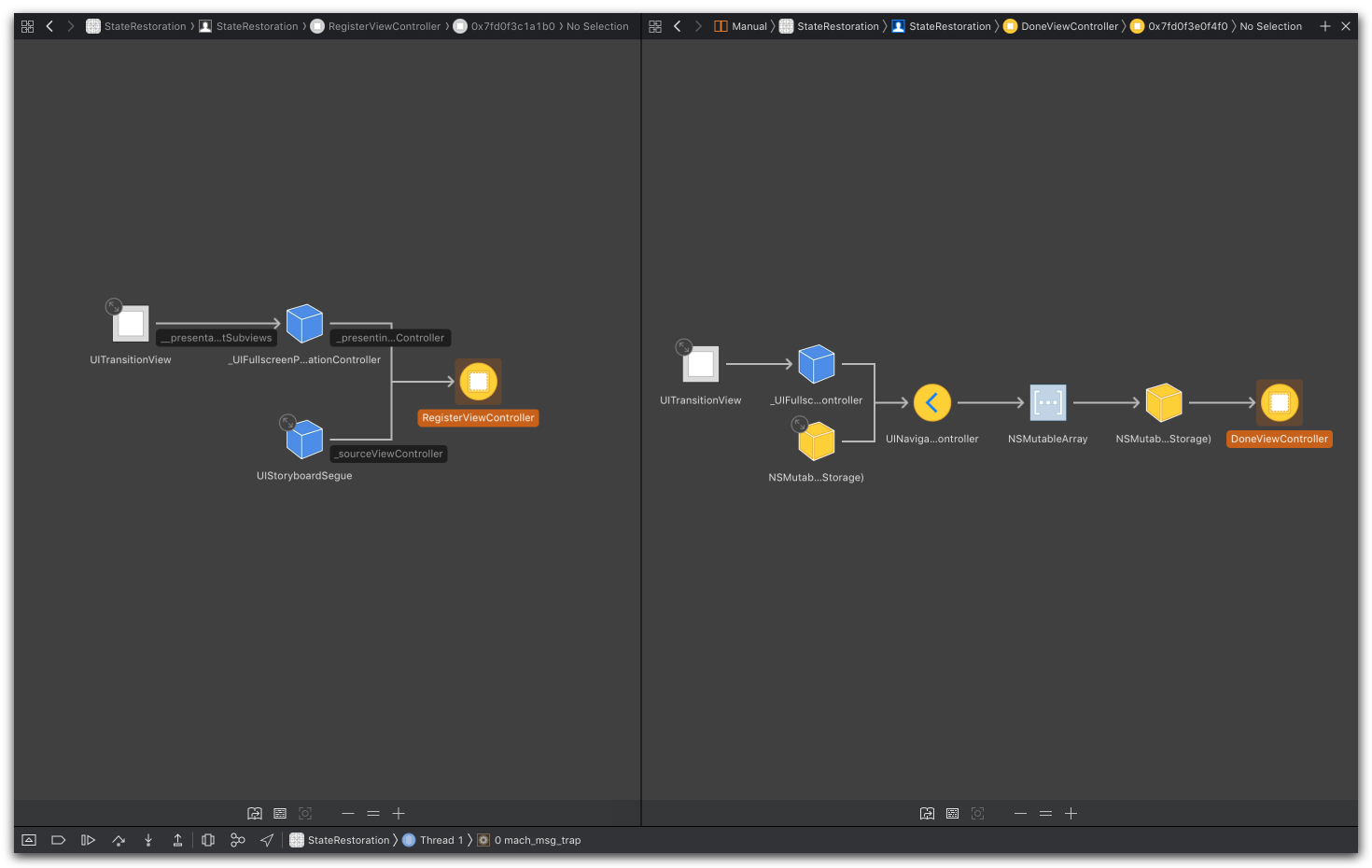 The DoneViewContoller is still very much allocated. The RegisterViewController as well as all of the UIViewController instances are also allocated (not seen in the screenshot). Finally, let’s dismiss the whole view hierarchy, as part of presenting the MainViewController, before replacing the rootViewController.

Here is the view hierarchy; no UITransitionView in the window. 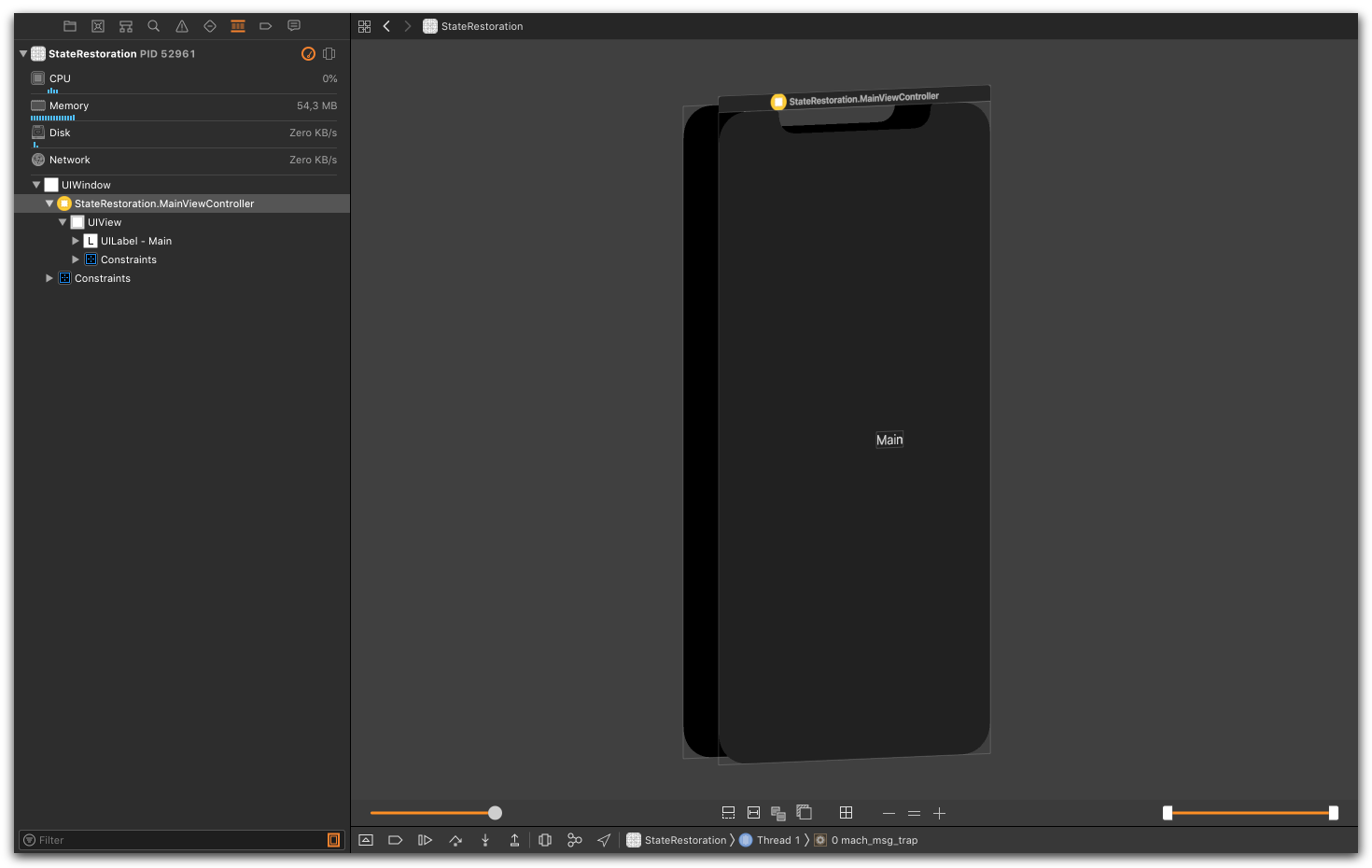 And here is the memory graph. 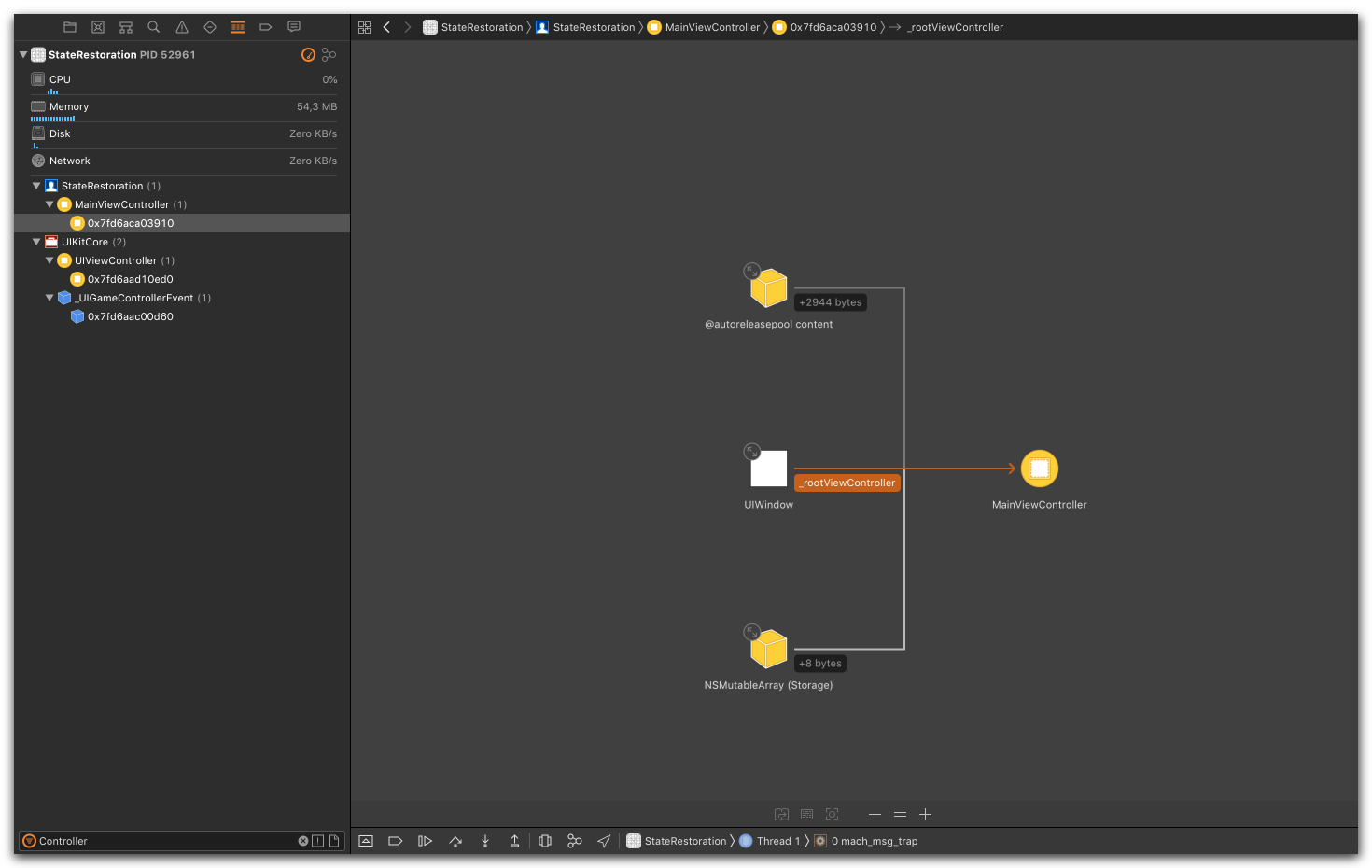 Well, that looks promising. Let’s see how it looks. The video on the right gives you a freeze frame.

What’s happening here? In an effort to remove every UIViewController from the view hierarchy and memory graph, the code completely ignores the presentation. The present and dismiss calls are happening independently and on separate transition contexts.

Let’s break it down.

Before looking into how to best replace the rootViewController there is one more thing to consider.

This is where state preservation and restoration feature comes in. One thing to keep in mind is that every ancestor UIViewController, including the one whose state you want preserved and restored must have its restorationIdentifier set.

The simplest way to test preservation and restoration is via Xcode. Launch the app, navigate to the view controller with a restorationIdentifier to preserve. Then:

What you can’t see from the video is that shortly after I put the app in the background, I stop the execution via Xcode. Effectively the app is now considered to be terminated by iOS.

That looks good. Let’s try it on the MainViewController now.

You can briefly see the snapshot of the MainViewController that was taken just before the app moved to the background. Followed by the “Initial UI”.

Obviously the state preservation and restoration isn’t working as expected. I haven’t been able to gather enough information so I am only guessing that state preservation and restoration is coupled to the presentation and transition context. In other words, it’s not enough to simply set a new rootViewController and expect it to be restored. Whatever UIViewController to be restored possibly needs to be a descendant of the “Initial UI”. If you do know more, I would very much like to hear from you.

One way to think about a container view controller is how a UITabBarController manages the presentation of the view for each UIViewController set in its viewControllers property. Every time you select a tab, the corresponding view appears into the window’s bounds and the control is passed to its respective UIViewController.

Thinking back to what we were set out to do. We want to bring into the window the view of another view controller while replacing an existing stack of view controllers. Which sounds awfully lot like how a UITabBarController behaves.

Now that a UIViewController manages the view hierarchy presented, we can replace notifications in favour of an unwind segue. Nothing to see in the DoneViewController. The unwind segue is defined in the storyboard.

The AppDelegate has all of the code related to the notification removed. Here is the code for the RootViewController.

Let’s see it in action. 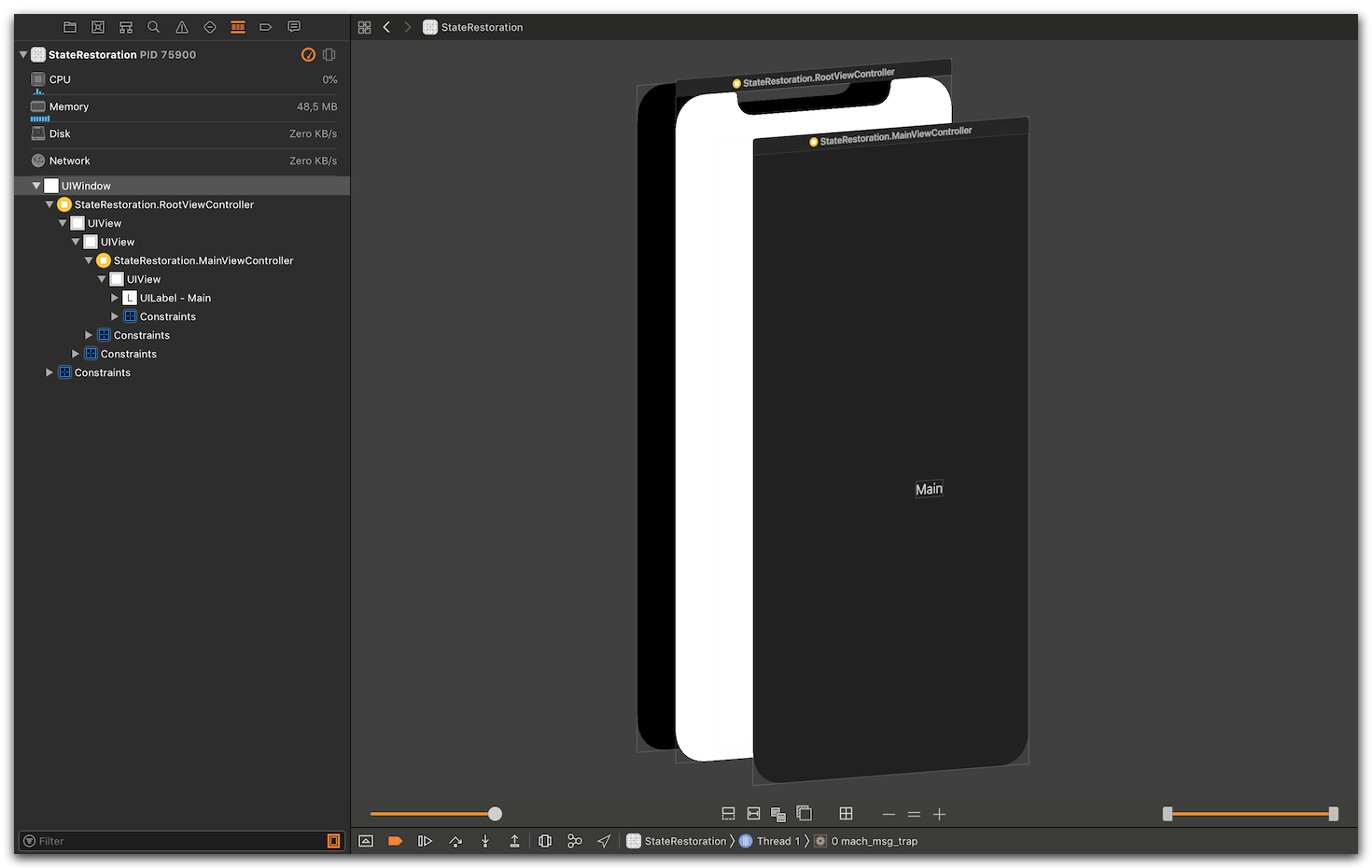 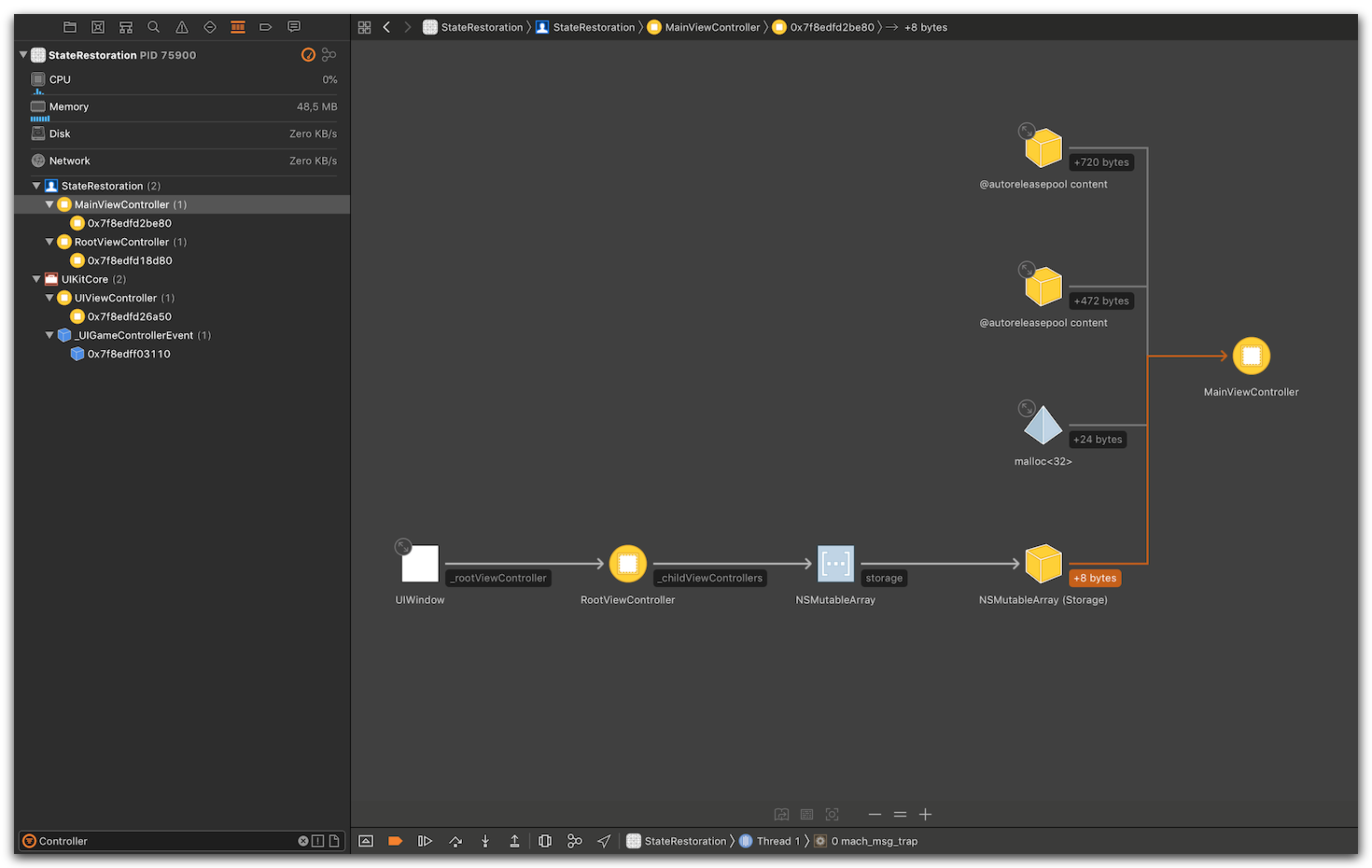 How about state preservation and restoration.

One thing to keep in mind when preserving a UIViewController that acts as the container, is that your code is responsible for saving any references to its child view controllers. Here is what it looks like.

This time, the MainViewController is restored as expected.

For completeness, here are the visual hierarchy and memory graph of the app after the restore process is done. 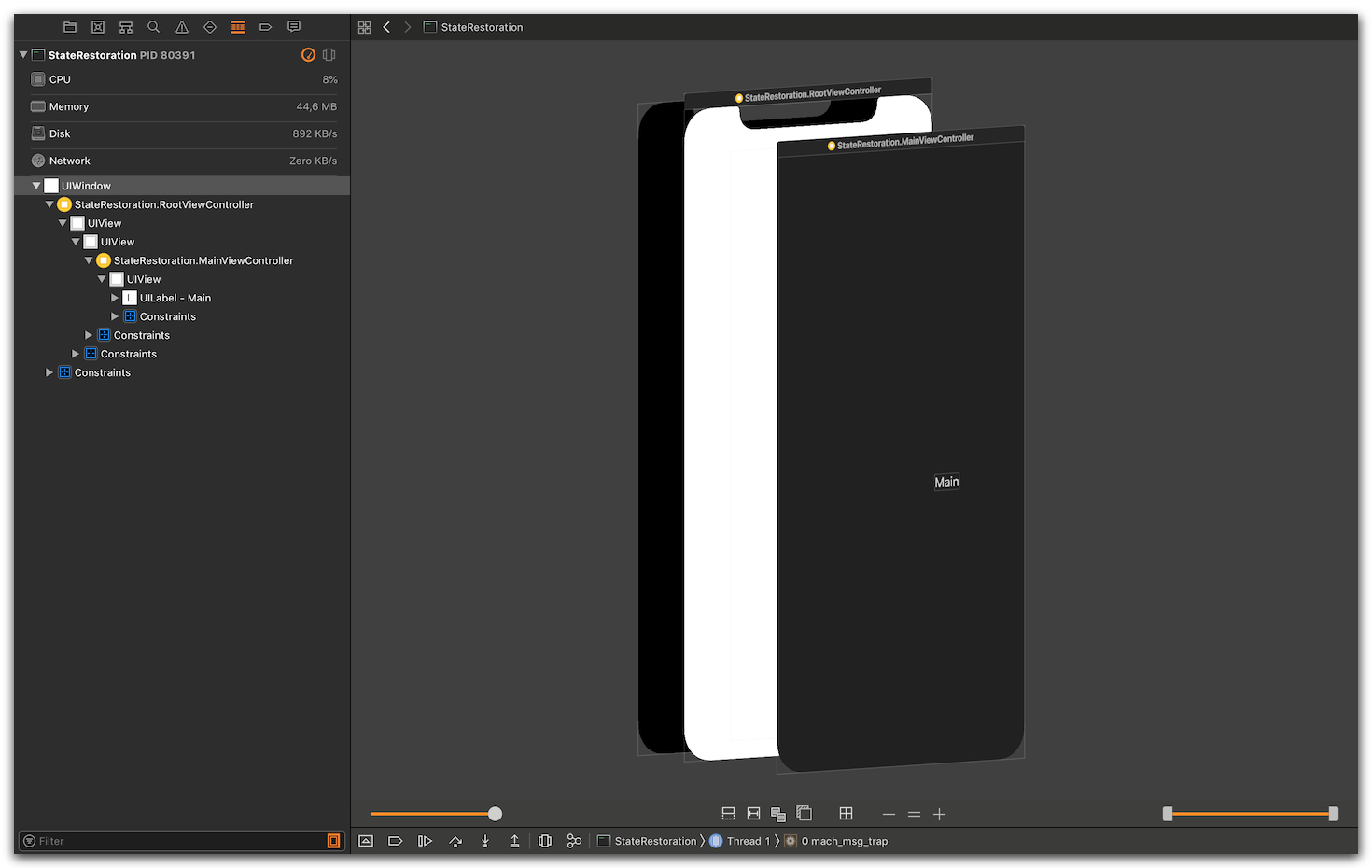 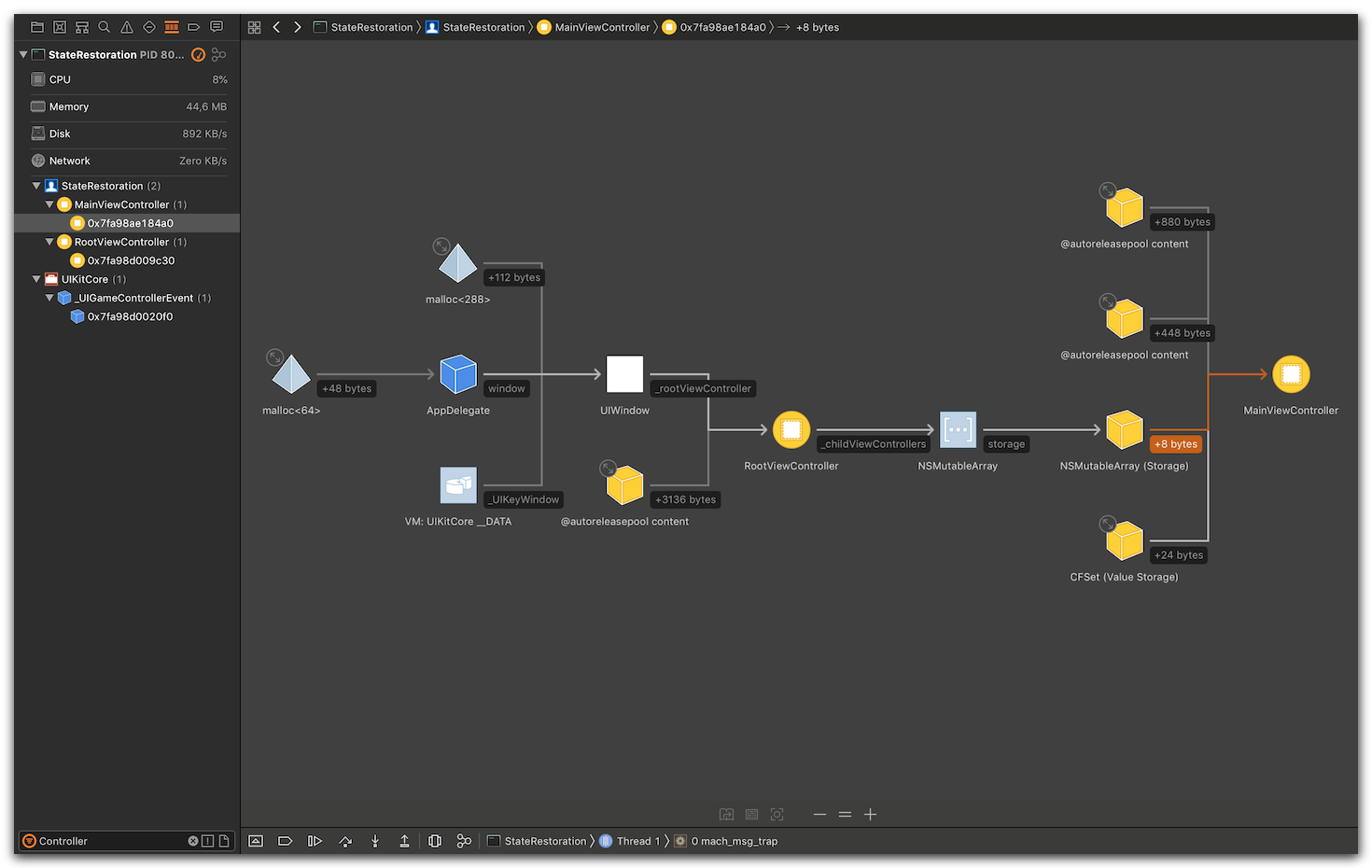 Keep in mind that the user can, at any time, kill the app. At this point, the restoration process will not happen and the rootViewController will revert back to the one in the “Initial UI”. This will also happen if your app crashes.

ISTR that removing the app from the multitasking UI specifically disables state restoration, on the grounds that the user only does this when there’s something wrong with the app and thus it’s better to start from a clean slate. - Quinn “The Eskimo!”, Apple Developer Relations, Developer Technical Support, Core OS/Hardware

You should anticipate, embrace and gracefully handle your app reverting to its “Initial UI”.

As an example, in the case of a registration, it is possible that you store some authorization token to give access to the user. On startup, you can detect that and allow the user to login with the existing credentials.

One thing to consider is that if you decide to hardcode the decision as to what rootViewController to show, you effectively limit the choices you can give to a user to recover for a “bad state”. If the user cannot merely terminate the app, they will have to re-install.

Consider giving the user the ability to fallback in stages:

Should you wish to preserve the rootViewController, consider the native iOS support of preserving and restoring state.

Keep in mind that state preservation and restoration goes beyond what UIViewController is present. UIKit views can also have preservable state. As an example, a UIScrollView preserves its zoomScale, contentInset, and contentOffset properties, effectively “so that the content appears scrolled to the same position as before".

That can be useful for persisting any registration steps as the user goes through, browses through a collection of photos or reads a long text.

I would like to thank @marc, @jsorge, @tekl of Seattle Xcoders for their input and for keeping me sane through this. Even though I am remote, Seattle Xcoders has welcomed me as if I am based in Seattle.

Shoutout to Andy. It may have taken 3 years but we did it!

This is one of the many technical challenges that I am tackling as part of making Windmill on the iPhone the best experience it can be.

I have been busy working towards Windmill 3.0 which brings publishing of your apps during development.