Where is Windmill on the iPhone?

I am hearing from the developer community there is a broader concern around the restrictions and the limitation on the tools Apple provides and allows. I want to kick-off a discussion about this to address these shortcomings. How should Apple enable developers to improve on the tooling for the iOS development ecosystem? I’d love to hear your thoughts.

Some of the questions to get the conversation going:

I will add what you’re saying below. Please mention @windmill_io to help me track your responses.

I wish Apple were better at collaborating with the developer community, instead of just controlling it. If Apple stopped trying to do everything itself, focused on just building a great platform, and let us solve our own problems, everyone would win.

Apple should be in the business of fostering creative solutions to lots of different problems instead of shutting them out.

Let’s see if planting the seed of making the language and some frameworks open source can grow into a more open ecosystem of tooling. The closeness of Xcode is one of the things that annoys me the most.

I don’t understand all the issues here, I admit, but I start by thinking that useful developer tools should be allowed on the App Store.

Apple’s loss ultimately when people stop innovating for their platforms

Windmill on the iPhone allows an organisation with an iPhone app under development to make that app available for distribution on any devices they own, as documented in the iOS Deployment Reference.

It makes use of ad-hoc distribution to make it dead easy to get started as a small- to medium-size business, with app distribution to half a dozen or so devices, while progressing towards TestFlight.

It allows businesses to distribute their app continuously while still in development, at regular time intervals, on demand, or as a reaction. 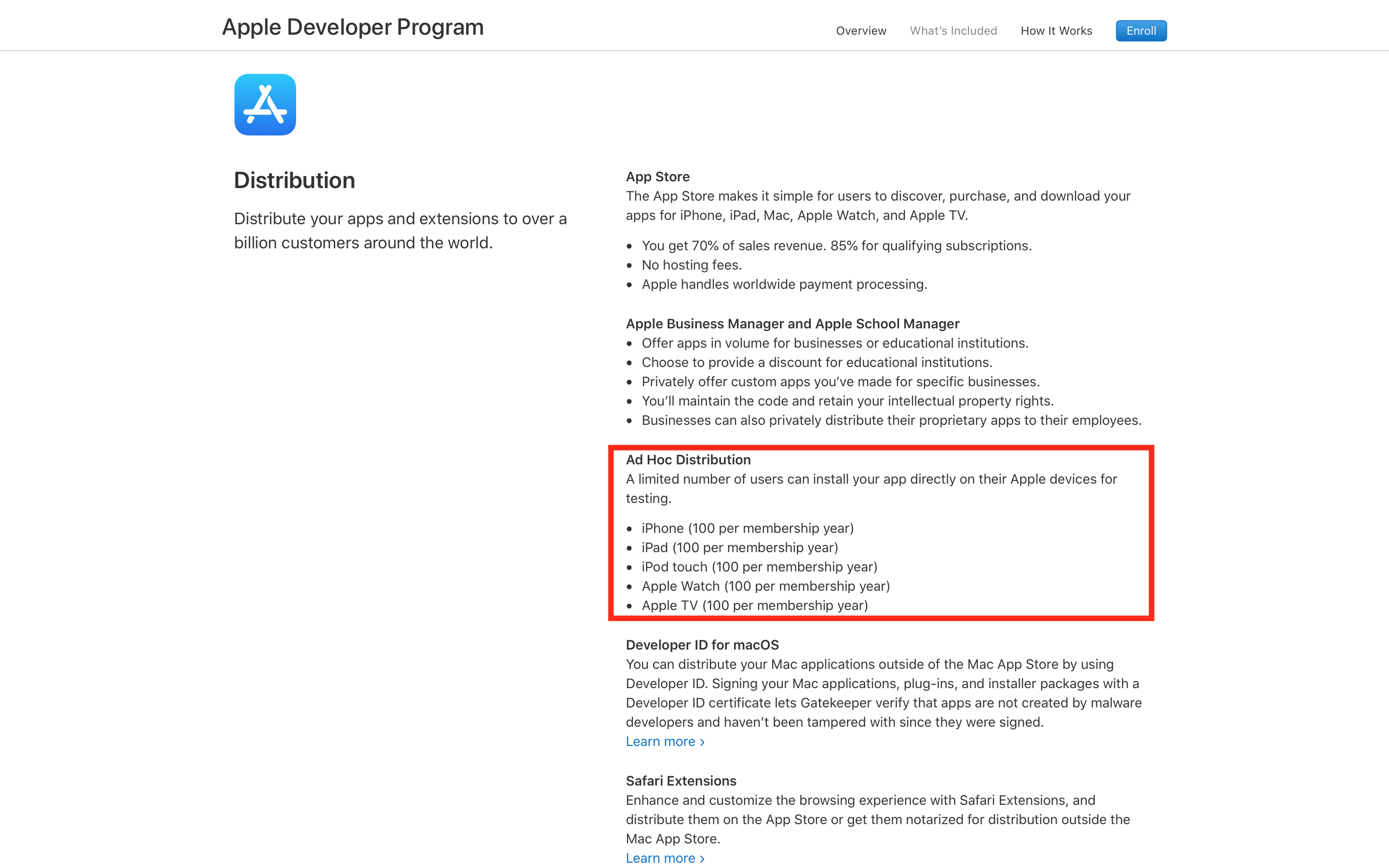 Windmill on the Mac continuously monitors the codebase, as made available in a git repository, so that every time a developer pushes a code change, it ensures the app still works. A developer starts using it as soon as they start working on an iPhone app.

It runs on Apple hardware that the organisation owns, on their premises. Therefore, it does not expect them to hand over their Apple Credentials, Distribution Certificate, Private Key, and Provisioning Profile, making it more secure than systems asking developers to hand these files over and keep them stored on their behalf.

Windmill can scale up to a platform where an organisation runs multiple instances of Windmill on the Mac on the available hardware to define a workflow and enforce security requirements.

An organisation in a small office with 2 developers and 1 product owner would have each developer running Windmill on their development Mac monitoring their respective feature branch, as well as an instance of Windmill running on a dedicated Mac mini monitoring the master branch.

This way, each developer gets feedback on their own codebase while the Mac mini holds the Distribution Certificate and Private Key to distribute releases and report on merges. This allows an organisation to have an overall view, a shared knowledge and centralised security on their app. Does the app compile? Are tests available and passing? Can the app be installed on a device? Can we release on the App Store?

To Apple’s credit, they did take their time evaluating Windmill on the iPhone and Windmill overall.

Windmill on the iPhone was in Review for over 20 work days and an additional 5 after I sent an eight-page “Letter of Appeal” to the App Review Team with the following:

I have been on a call with the App Review Team at Apple twice. I was told that Windmill on the iPhone is “not acceptable” to be on the App Store. Additionally, taking a “holistic” look at Windmill I was told that “conceptually” it is in violation of the Apple Developer Program License Agreement.

I also emailed an Apple Developer Tools Evangelist asking for help to find a way forward with Windmill and for some course correction to be done. That was more than 2 weeks ago. I haven’t received a reply.

I both understand where Apple is coming from and I don’t.

I was reminded of one very specific reason that I was given too.

YOUR APP IS TOO SIMILAR TO TESTFLIGHT, WHICH CREATES A MISLEADING ASSOCIATION WITH APPLE PRODUCTS. WE ENCOURAGE YOU TO REVIEW YOUR APP CONCEPT AND EVALUATE WHETHER YOU CAN INCORPORATE DIFFERENT CONTENT AND FEATURES TO BRING IT INTO COMPLIANCE WITH THE APP STORE REVIEW GUIDELINES.

Apple seems to take issue with the fact that Windmill is meant to be used for development, in-house, but Windmill on the iPhone was meant to be made available on the App Store.

More importantly. Apple took the stance that the Command Line Tools Package is only meant to be used by developers in-house and not by 3rd parties to provide support for continuous integration systems - continuous delivery in the case of Windmill.

Before you gasp, here is the nuance as I understand it1.

Apple takes issue that Windmill makes it effortless for developers to create a distribution mechanism for their apps outside the control of Apple and the safety of the App Store and TestFlight.

Hosting of pre-release software through means outside of the app store and facilitating developers to use their certificate, provisioning profile to do so is not permitted.

Even though ad-hoc distribution is limited, Windmill imposes strong security requirements and is designed for in-house use only.

After all, Windmill is available to every developer. Not just organisations with the know-how. Its mission is to make continuous delivery of iPhone apps ubiquitous and accessible to developers and businesses in an effort to improve consistency, a high level of understanding and agreement across the industry.

It doesn’t seem to matter what Windmill is designed to be used for but what it could be used for. It is precisely why Apple had to say that the Command Line Tools Package is only meant to be used by developers alone.

Xcode command line tools are only provided by Apple to developers to automate building, testing and distributing their app.

Had an organisation built Windmill for internal use, distribution would be under their control, used exclusively for their apps, and operating in their internal network.

Windmill on the iPhone would probably be built and distributed using an Enterprise Certificate, internally to the employees of the organisation or using ad-hoc distribution. In this case, it wouldn’t matter since it’s internal to the organisation.

Even Xcode Server, Apple’s home grown offering to in-house continuous integration and distribution comes bundled with a web server, “where you and members of your development team can use a web browser to view the status of bot integrations and download assets and products.” See Monitor and Manage Bots.

Windmill does not operate outside of the boundaries as defined by Apple.

Windmill could not be used to distribute apps to the public, circumventing TestFlight and the App Store anymore than a developer can do today without Windmill or using existing services that offer ad-hoc distribution on the web.

Windmill may be the only third-party native macOS continuous delivery app available on Apple platforms but it probably comes last in offering such a service to developers.

I wish Windmill on the Mac was also on the App Store. Reviewed, approved, endorsed and recommended by Apple. The decision to build Windmill on macOS and iOS has become a liability.

With Windmill, I effectively asked Apple to weigh in on the matter and Apple has decided that the risk far outweighs the benefits that Windmill has compared to existing offerings outside the Apple ecosystem.

It is possible that Windmill can only live within the confines of the Apple Business Manager with Windmill on the iPhone as a Custom App. Which does not help fulfil its mission.

Collectively as an iOS community, we have spent an insane amount of time and put an immense amount of effort in automating the delivery of our apps by writing flaky scripts in bash using Jenkins, reverse engineering the Xcode project file format, writing blog posts with our findings. Yet we are none the wiser and have barely made a dent. - iOS Automation - The Current State of Affairs

I completely misread the situation with Apple. It does not make it any easier that Apple has a tendency to be overly protective of the ecosystem. I understand why, I just wish Apple had embraced Windmill.

I had made plans to take Windmill even further, beyond distribution, onto other Apple platforms. Now, I am not sure what I can do while Apple stays silent.

Windmill is the culmination of the experience I have accumulated as a developer over the past 15 or so years. On top of that, it took months of research and development on the Mac, on the server, and on the iPhone, paying great attention to the user experience as well as security and privacy that would not and cannot be made possible without deeply integrating with Apple’s tools, platforms and services.

I can’t help but feel disappointed and highly discouraged after all the work I’ve put in improving the tooling available to developers.

I would like to express my deepest gratitude to everyone at the Seattle Xcoders group. They have been very supportive all this time when I struggled mentally and needed them the most.

Special thanks to Daniel Jalkut.

A call for discussion

Beyond the personal and financial setback this is causing me, I am hearing from the developer community there is a broader concern around the restrictions and the limitation on the tools Apple provides and allows.

I want to kick-off a discussion about this to address these shortcomings. How should Apple enable developers to improve on the tooling for the iOS development ecosystem? I’d love to hear your thoughts.